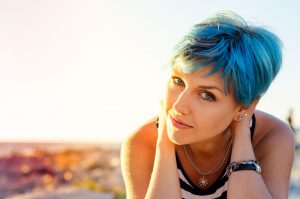 “Who are you to pass judgment on the servant of another? It is before his own master that he stands or falls. And he will be upheld, for the Lord is able to make him stand.”

This is a subject a little off the beaten path of my normal message of advocacy for victims of violence, but bear with me, because it is connected. The fruit of one conversation being held within the church is alienation and misunderstanding, plus a confusing anti-gospel burden placed on the consciences of a lot of people I know. In light of that good extenuating circumstance, I have a few things to say.

For a while now I’ve watched a small but persistent storm of messaging going by in some Christian circles, especially traditionally complementarian ones, that says women who pursue edgy style choices (such as tattoos or piercings, or dyeing their hair the colors of the rainbow) are actually rebelling against God-ordained gender roles, or expressing their inner wounding, or both. Of course conservative Christians have always been a little extra absorbed with appearances, and they build all sorts of cases referencing the roles of men and women, the essence of the gospel, and our role within culture to support their perspectives. While I agree that how we dress communicates something, I question the value of making this rather open-ended principle a focus — or worse, offering up a misinterpretation of what is being said. I have two main concerns. The first is that when we start identifying an “Us” versus a “Them” that is based on appearance we are actually self-protectively outlining the edges of our tribe. This binds wrongful burdens onto the consciences of some, and pushes others away.

Exhortations like this one, from one complementarian Christian pastor, amount to an assessment of the hearts of fellow believers based on their hair color.

In the ordinary course of things, God designed for much of [a woman’s] glory to be communicated through godly husbands, fathers, brothers, and other honorable men in appropriate ways. But unfortunately we live in a world of men that have abdicated this responsibility. Some have simply failed to be anything more than a bump on a log. Some have tried and given up. And still others have taken their own insecurities and frustrations out on the very women God entrusted to them to cherish and protect. This has left us with a world full of women starving for love, embittered with pain, and grasping for something, anything to fill that aching void. I certainly grant you that the sin involved in dressing a boy up as a girl is far worse, but you need to see the fact that it’s in the same category as a woman wearing her hair short like a boy, dying her hair clownish colors, or otherwise trying to attract unnatural attention. But no hair color will soothe your pain. No haircut will fill that void. No piercing, no amount of cutting, no number of likes on your Facebook sob story diary entries will give your confusion meaning.

Statements like this must be so difficult and humiliating for the women who have already gone and dyed their hair, which is really sad. They tend toward creating us/them divisions, not just between the church and the world, but within the church itself. As author and blogger Rebecca Davis astutely noted in a recent post about conscience and abusers,

Paul’s point about “knowledge” and “liberty” was that no Christian would be made any more or less holy by any religious activity (like offering to pagan idols) regarding any actions that were morally neutral in and of themselves because their holiness was accomplished in Christ alone.

A weak conscience, then, is one that doesn’t have the full strength of understanding of what Christ has accomplished…and as a result thinks that certain activities—like eating ceremonially cursed meat—would affect that standing.

Ms. Davis goes on to say that the Judaizers, whom the Apostle Paul battled fiercely, had “wanted to control the consciences of the new Christians in order to keep Christianity from being the free, transformative gift of grace that it is,” and she points out that pressuring believers to abstain from things that are actually morally neutral, such as hairstyle and clothing choices, can be just as confusing and debilitating as encouraging a weaker brother to participate in activities his conscience tells him are wrong.

Teachings that alienate some believers and bind burdens on the backs of others should obviously be resisted; but I have a second, slightly more nuanced, objection to the direction this conversation has taken.  I work in advocacy for domestic violence victims, which means I get front row seats to the fallout from conservative complementarian* Christianity. Let me tell you, this world is not a pretty one — or perhaps I should say, this world can look good on the top, but it has a dark underbelly. Communities in which men are strongly dominant and in charge can be benevolent places to live, no argument there, but when they are not, they are perhaps exceptionally dangerous. Inside of a kind patriarchal culture, women and kids can be well provided for; inside a corrupt one, anyone not vested with authority in leadership may be very thoroughly cut off from avenues of escape. In my life, I’ve seen examples of both kinds of patriarchy. I know of good Christian men who believe that men should be in charge and are still good men, but I also know of many, many Christian men who have been corrupted by the undue power that is granted to them by their own theology and supported by the popular opinion of their peers.

So let me just throw this out there. I know women of all ages who wear tattoos, who cut their hair, who dye their hair, who pierce their noses, their lips, and their bellybuttons. They do it for a whole host of different reasons, some meaningful, some not so much. I think it’s safe to say that most of these women are not trying to send a message, but are simply having some legitimate fun with color and creativity and individuality, just because they can (and as believing Christians, they certainly can):  “Since you died with Christ to the elemental spiritual forces of this world, why, as though you still belonged to the world, do you submit to its rules: “Do not handle! Do not taste! Do not touch!”? These rules, which have to do with things that are all destined to perish with use, are based on merely human commands and teachings. Such regulations indeed have an appearance of wisdom, with their self-imposed worship, their false humility and their harsh treatment of the body, but they lack any value in restraining sensual indulgence.”

But, as Pastor Sumpter suggests, there may in fact be some women out there who are in a state of social reaction, and are trying to send a message with their hair. What about them? What exactly might they be trying to say? Are they really expressing a deep woundedness because of the abdication of their husbands and fathers? Well…maybe. I would like to suggest that Sumpter is half right, but he makes both much too much, and much too little, out of what he sees, and in the process misses an entire demographic of women whose message really ought to be of interest to him, and to all of us who come from within conservative evangelical Christianity.

Some women have excellent personal reasons for not wanting to look like conservative women inside of a male-dominated culture. These are women who are refusing to wear the uniform of the enemy, and for them, that enemy may be the family or the church they just barely escaped from with their sanity intact. It may be the power structures that subjugated them, that kept them and their mothers and sisters and brothers and friends trapped and cut off from rescue. It could be the church that placed such a heavy emphasis on authority and submission, but failed to stress they had any worth that was their very own as a gift from God, and not derived from their position relative to others. It is perhaps the family that said their job was to be special and beautiful, but only in mapped out, predetermined ways. The enemy, as far as these women are concerned, is the whole system that sustains prerogative while suppressing individuals, that puts the structure first and the people inside of it second, that amplifies the voices of those with power, mutes the voices of those under authority, and offers those awful, empty promises that just a little more silence, submission, and long-suffering will make it all work out right in the end. The difference between me and Pastor Sumpter is that, instead of telling these sisters to toe the line, I think we ought to listen to them. This system is our system, and these wrongs were done by us.

If I could send a single message to all of complementarian Christianity in one fell swoop (hey, I can dream), it would be this: Stop trying to control outcomes. Stop trying to manage the behavior of your women and children, and instead, take a moment to go back and see these people as people. Let’s take some time to put right the harm our systems of power have caused. Let’s set straight the imbalances and the inequities, and for heaven’s sake, let’s all stop pretending they never really happened, or were just some fluke of a moment. We have to stop policing our boundaries and reinforcing all our favorite tribal taboos, and work toward real communication, understanding, and empathy instead.

To the women I want to say this. Dye your hair, my sisters. It looks creative and beautiful, just like you. Also, if (as I suspect) some of you do wear it as a flag that says you are opting out of a corrupt system of power that hurt you or those you love …. well, that’s something I can totally understand and sympathize with. To my daughters and the daughters of my friends, I want to say: Do nothing out of selfish ambition or conceit, or hatred, or contempt, or disdain, but always out of love, which may legitimately and honorably be defiant against oppression and systems of false piety. Blue hair and nose piercings may not be my thing, but insofar as you are drawn that way as a symbol of your true freedom before God, I love it, and I love you, and that’s something I can get behind.

And to the people who muse on the motives in the hearts of others, I have just this. Every time you frame the discussion this way — the khaki slacks vs. the blue hair, the conventional vs. the provocative, the us vs. them — you pass by an opportunity to see and talk with the people involved. Women have a lot of different reasons for flying the flags they fly. With all that brightly colored hair, they shouldn’t be too hard to locate. Why not go find one, and ask her about it?

Only that now you have taught me (but how late) my lack.

I see the chasm. And everything you are was making

My heart into a bridge by which I might get back

From exile, and grow man. And now the bridge is breaking.

For this I bless you as the ruin falls. The pains

You give me are more precious than all other gains.

*I use the terms complementarian and patriarchal interchangeably. Both are meant to describe conservative Christian communities that place a heavy emphasis on the differences between gender roles, with the result that in family, church, and business, men are expected to hold the positions of leadership, authority, responsibility, and power, while women are expected to orient themselves toward their men and fill supporting roles.