Most of the daily funnies (as seen in the last post) are completely random. Nelly, for instance, produces a nearly constant stream, and the only hindrance from sharing them around is that there’s nothing to tie them together into narrative. Cataloguing one’s children’s cutenesses is not popularly looked upon as intelligent. Nonetheless, I will now be gauche and offer a selection of Nellyisms.

…calls it “mumping her med,” when she whacks her little noggin on the table. This announcement is full of pathos and could bring tears to the eyes of a sphinx.

…knows that we read the “Mimle” every morning in family devotions. Large mooks with dark covers are usually considered to be Mimles, too.

…joins in every hue and cry. If Inge and Lewis are yelling “Yeaaaaah!” (e.g., that they want some candy, want some apples, want some lunch, want to read a book, go to the park, etc.), Nelly will be front and center within seconds, yelling “YEEEAAAAAH” the loudest of anyone.

…runs at a 45 degree angle to the ground. We don’t know how she does it.

…asks to be picked up, or gotten down, by saying simply “Me?” unless she’s in her highchair, and then she says, “Nit nown?” 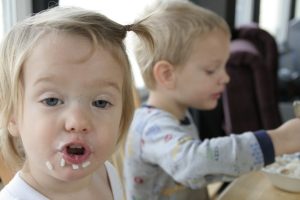